calm before the storm

This week we are having our utility room and dining room remodeled.

The utility room we are taking out the closet and having the floor taken up. Once we can see the concrete we will decide if we want to keep the bare concrete or paint it. After that we are going to put shelves along the whole wall where the closet was (giving us ALOT more storage space) and then we will move the refrigerator from the kitchen into the utility room - and of course get a new refrigerator for the kitchen.

The dining room we are having the walls redone to remove the molding artwork on the walls.

So this weekend I spent taking everything except the washer and dryer out of the utility room and getting everything out of the dining room. I had enough time this morning to get some "before" shots which I will post with the "after" shots.

removing some of the original shelves in the utility room I found out the original color - a seventies style neon yellow-green. The previous home owners were definitely children of the seventies :)

Oh well I gotta run. Jorge (the man doing the renovations) is here.

Oh this has been a fun couple of weeks.

The best thing is that Nate lost his front tooth. It's been loose for over a month and came out when he was brushing his teeth. So Nate had another visit from the tooth fairy :) 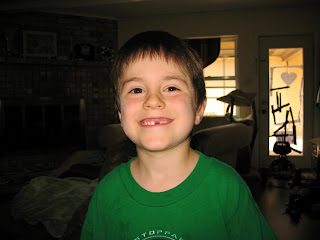 Friday last week Chris' back went out on her. It was a double whammy because the pain was so great she did not realize she also had strep until Sunday. So I took Monday off so she could go to the doctor. For those who really don't know Chris that was a indicator of how bad she was - she called the doctor. They gave her some medicines for both her strep throat and her back. I worked from home Tuesday, Wednesday and Thursday because her back was still hurting her.

This weekend we had to face the consequence of Chris being sick. Every two or three days after Lexi's bath Chris would sit down with Lexi and comb out the tangles in her hair. Fast forward 9 days and Lexi had some tangles that would no longer comb out. So for the first time in over a year Lexi got a haircut. 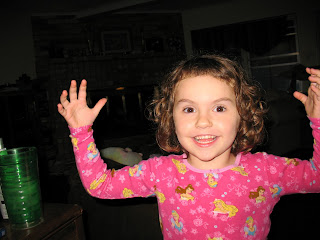 I uploaded some pics of Nate and Lexi - enjoy.
Posted by Unknown at 10:21 PM No comments:

Took the kids to the park today

I had to work the last two weekends to get caught up on a project so I took today off as a comp day and took the Lexi to her class at the Hurst recreation center and then let them play in the park.

We signed the kids up for two classes each for June. Both Nate and Lexi took a kids cake decorating class last week. Thankfully that was a one time class because mommy and daddy had to put our diets aside that day to eat each of the cakes to tell them that they were both equally delicious.

Nate has a kids science class each Thursday. Last week he made a model of a molecule out of marshmallows. This week he learned about carbonation and had a burping contest after drinking a bunch of root beer.

Lexi has a kids sports class each Friday. The last two weeks they have been teaching her soccer.

After her class I let them play at the park outside the recreation center. Fortunately the morning weather was really mild and the breeze was cool so I was able to sit in the shade comfortably while the kids played.

While the kids were having snacks a squirrel came up and I fed him a cracker. When the squirrel came back Nate gave it another cracker then ran off and played. The squirrel kept coming back until it had enough crackers then took off.

I found some pictures on the camera that I forgot to post from our memorial day trip. I posted those and the pictures from today at the park. Enjoy :)
Posted by Unknown at 5:14 PM No comments:

The kids are sick

The kids enjoyed their first week out of school (Nate was in Kindergarten and Lexi was in 2 day a week preschool). This week though Lexi came down with something and Nate got it tuesday.

Kids being sick is an interesting experience. They will get up in the morning with a fever and feeling bad. So we give them some Motrin or Tylenol and they rest until it kicks in and the fever goes away. Then they get start running around trying to make up for lost playtime until the medicine wears off and they get feverish and crabby again. And the cycle goes on and on no matter how many times you tell them "if you just sit down and keep resting you will do alot better tomorrow."

They were both doing better last night though so hopefully by the weekend they will be okay.